Compared to the frequent exposure Samsung GALAXY S7, the next generation of the flagship HTC seems low-key a lot. However, recently @upleaks leaked some clues about the HTC new flagship mobile phones on his blog. Spoke of the HTC One X9's originally named is HTC One S10, later changed to the present name, this seems to imply that the official name of the next generation of HTC flagship phone might be named as HTC One M10, and has the same design language, in the case of retained BoomSound front speakers, it will also bid farewell to the previous model, but with more powerful features.

It is worth mentioning that, if HTC One M10 in the overall design style is similar with the HTC One X9, so the riding position of M10's fingerprint recognition, naturally became a hot topic that we care about. However, due to the M10 may be equipped with Snapdragon 820 processor in the future, so Qualcomm's ultrasonic fingerprint recognition technology is the best solution, for example, can be integrated into real touch Home key, and obtain higher accuracy of fingerprint identification. As for other configuration, HTC One M10 may be equipped with 2K display, load 16 million-pixel camera and is equipped with sapphire lens, supports optical image stabilization and laser auto focus, with 4GB RAM + 32GB / 64GB ROM of memory combination, and so on.
In addition, rumors that M10 will be a one-piece & all-metal body design, appearance is more beautiful and refined than the HTC One M9, and it also lead in the arcuate frame & curved edge design, with deep garnet red and metal gray two color style to choose.
Many media claimed that HTC One M10 is the annual best smartphones, although it's too early to say now, but I believe that many users are looking forward to own this outstanding smartphone, especially for the HTC fans. So, how to transfer personal data from your old HTC phone to the new HTC One M10? There's no doubt that, we will firstly introduce the Phone Transfer program to you.
Phone Transfer enables to copy your phone or tablet's content to any device regardless of device brand or network carrier with a click. So it's a piece of cake for Phone Transfer to sync data from old HTC phone to the HTC One M10, including contacts, text messages, photos, videos, call history, calendars, apps, music and more.

Now, please free download a Windows or Mac trial version of Phone Transfer and install it on your computer, following the below tutorials to have a try.

Step 2. Connect two of your HTC phones to the same computer via USB cables. 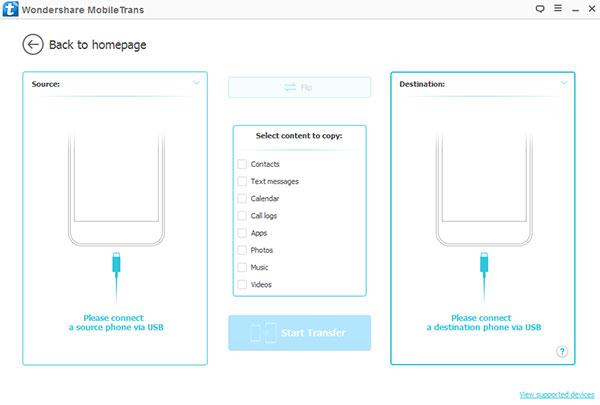 To tranfer data from old HTC to HTC One M10, please ensure that the old phone is on the left as the source phone. If not, just click on the "Flip" button to exchange their position.

Step 3. Once your phones are recognized, you can see all the transferable data from the source phone are shown in the middle of window. Select those what you wanted, and transfer them to the New HTC phone with a click.

Step 1. On your HTC One M10, go to Settings.
Step 2. Tap "Get content from another phone".
Step 3. Tap "HTC Android phone", here you can choose "Other Android phone" as well.
Step 4. If you’re asked to choose a transfer method, tap "Full transfer".
Step 5. Tap "Next".
Step 6. Follow the onscreen instructions to download the HTC Transfer Tool from Google Play to your old phone and transfer content.